View factsheet as at October 2020

Access to a well-established portfolio of operating broadacre farms producing a diverse range of agricultural commodities.

Duxton Broadacre Farms is an Australian listed entity providing investors with exposure to a diversified portfolio of high-quality, efficient, Australian farms. Australia presents a unique investment opportunity in this space because of the low-sovereign risk and potential for value uplift. To ultimately decide on Australia as the location for this Company, Duxton Capital Australia, being the Investment Manager, looked at some of the world’s largest wheat producers, who in aggregate, produce around 520 million tonnes of wheat each year.

Using various different measures of economic and sovereign risk, we narrowed the list down:

Using Savills’s 2018 global farmland index data, we then analysed these and other countries, and compared them in terms of the capital cost of gaining farmland exposure in these countries. Let’s say you have $100 million US dollars to invest.

For this, you could buy…

and an incredible 43,403 hectares in Australia

Land in Australia is incredibly well priced, but is it comparatively productive?

We assessed this by benchmarking the capital cost required, to purchase enough land, to produce the same 1 tonne of wheat, year-on-year.

To do this, it would cost you…

You can see why we saw opportunity to farm in Australia given the low sovereign risk, and the mis-priced land. Now the next question is do higher operating margins outside Australia justify higher land values – the short answer according to a 5-year study conducted by the Grains Research and Development Corporation.

So, you have invested your $100 million US and bought land in these, each of which provides a different level of production. Your $100 million deployed into Australian farmland based on average production will produce approximately 85,000 tonne year-in, year-out.

Now using the data from the GRDC study we have multiplied this by local average farmgate prices per tonne, to calculate revenue per annum, and by average cost of production per tonne, to ultimately arrive at an annual operating profit. In Germany, your $100m should convert to approximately $2.1 million of annual operating profit. In America, its only $2.2 million. In the UK, it is about the same, at $2.5 million.

Whereas in Australia, you $100 million US dollar capital investment converts to a year-on-year operating profit of around $6.2 million, assuming average prices and costs.

The Company therefore recognises potential for capital growth in the underlying land assets of the aggregations. Based on historical data, we also believe grain prices are at the bottom of the cycle, sitting near all-time low inflation adjusted prices. There are a number of catalysts which are anticipated to provide strong upward pressure on the commodities produced by Duxton Broadacre and teamed with potential up-lift in local land values, this should result in stronger returns for investors over time.

to our monthly updates 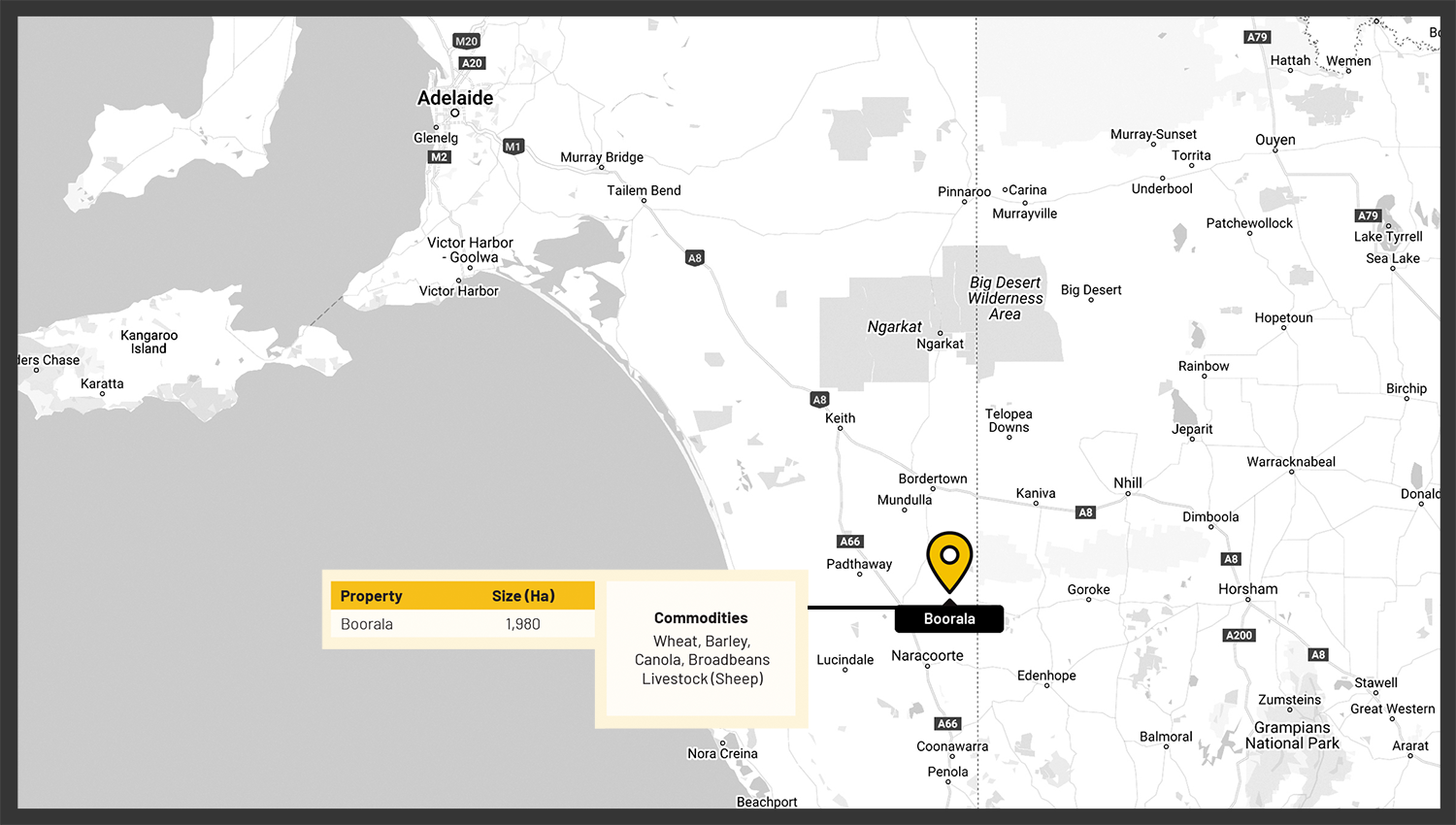 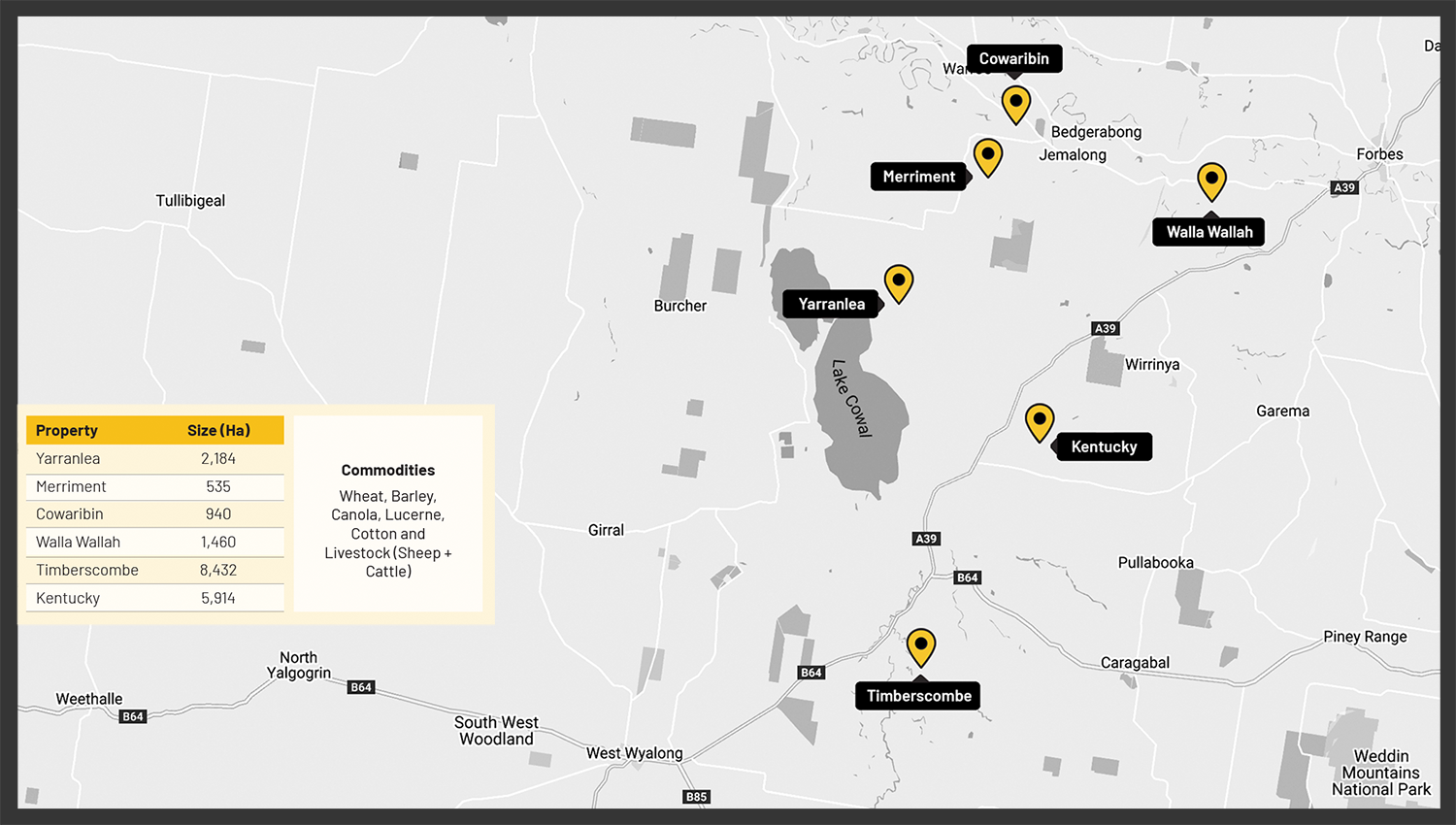 Duxton Broadacre owns and operates two major geographic aggregations. The aggregations are located in NSW, between Forbes and West Wyalong; and in South Australia, near Naracoorte. 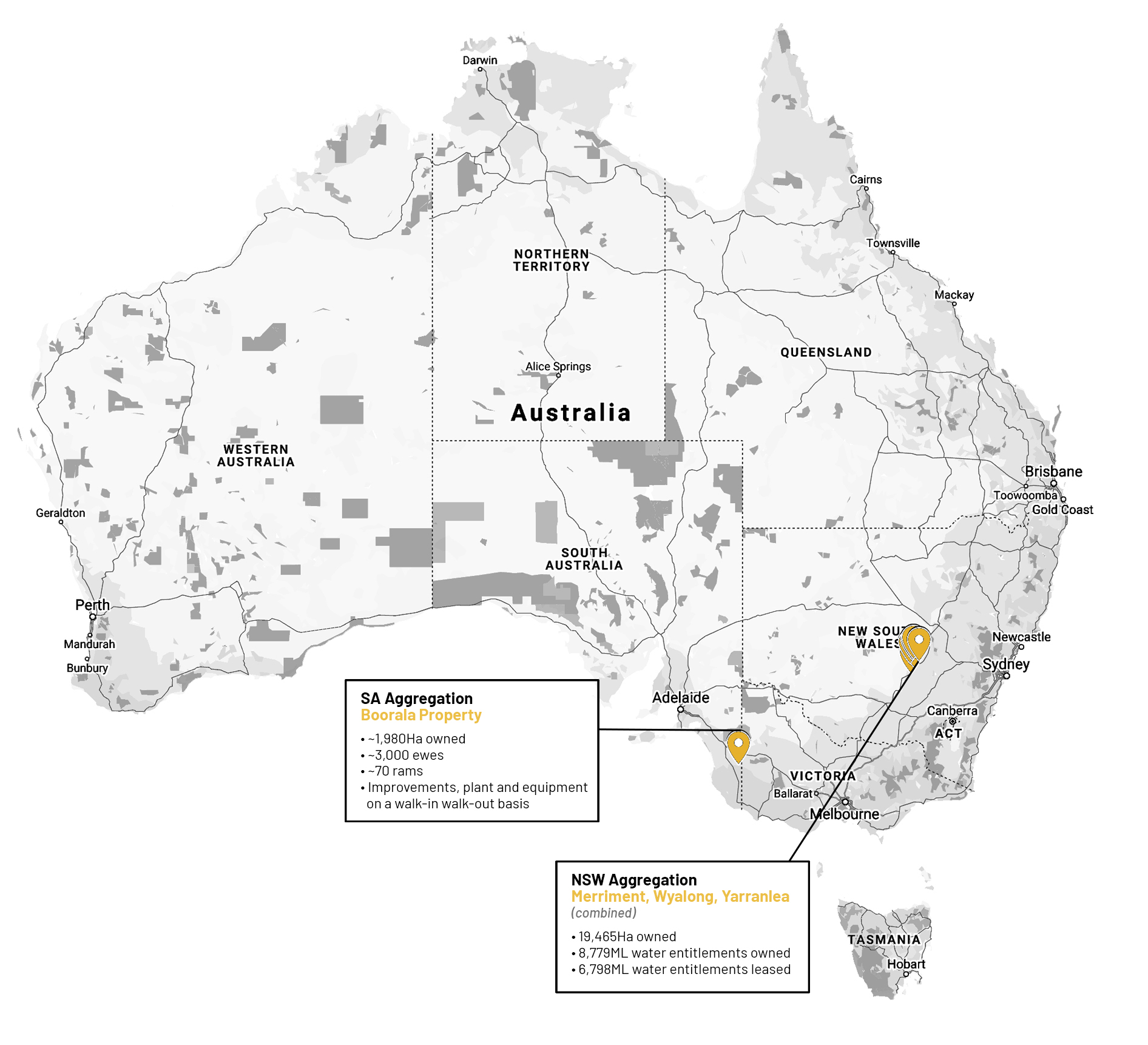 These properties are comprised of dryland and irrigated land, producing a diverse range of both summer and winter crops.

This Month on the Farm

During October, winter crops have been finishing well with good levels of soil moisture available. Preparation is underway for harvest which is expected to start mid-November with yields expected to be well above average. Fungicide sprays are continuing as required.

At Boorala, because of the continuing wet weather conditions, wheat crops originally designated for hay will be taken through as grain stock to reduce risk of producing weather damaged hay.

Planting of cotton was completed in early October and emerged well. Since emergence, the cotton has been growing in reasonably cold and wet conditions, with some of the cotton being damaged by hail in late October. The damaged cotton is insured and will continue to be grown out as it is too late for replanting. Preparation continues for fertiliser applications as the fields dry down.

Central-west New South Wales (NSW) recorded October rainfall of 102.0mm which is 60.4mm above the long-term average. Forbes has now received 235% more rain than the region did for all of 2019 and is significantly above the 15-year average. In south-east South Australia (SA), October rainfall of 53.4mm compared to the historic average of 37.4mm.

DBF is continuing to take advantage of the recent high livestock prices by selling livestock that meet market requirements, while also acquiring additional stock as favourable opportunities arise. Pasture is growing very well, with the new pasture planted this year being allowed to go to seed to extend the life of the crop. DBF continues to maintain adequate reserves of fodder for livestock.